Fussy love simple….especially simple recipes.  Take simple ingredients, (most of which were common supplies in a 20th century pantry or frig), boil them together and create a chemical reaction.  In the time it takes an oven to heat up, the ingredients are dumped together to create a fragrant, gooey batter. 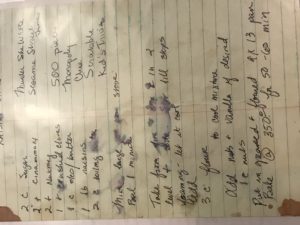 When this recipe was hastily written in Grandma Hattie’s kitchen, this Twenty-Something Foodie, just wanted Grandma’s magic at her fingertips available anytime the mood struck.  Fussy was tired of waiting for the ritual delivery of The Raisin Cake.

The delivery was always a ‘special delivery’. After a visit to a Texas, the cake was the special souvenir.  Wrapped in wax paper, then enrobed in two layers of aluminum foil, the cake was protected by a cardboard lingerie box.  Generally carried on a series of flights between Texas and California, Grandma Hattie’s Raisin Cake was the flavor of Texas.

No matter how well we tried to parcel out the cake, someone always managed to steal a sliver or full blown slice from the deep freeze.     The thievery and deception only made the cake more highly prized.  Fussy decided to own the prize.  Grandma gladly shared.  Hastily written on note paper from a spiral notebook, the recipe became the ‘Go To’ recipe.  Easily prepared, and greatly appreciated.  Minimal effort, maximum acclaim, that’s the kind of recipe Fussy loves.

Ignore the holiday shopping list.  Read through the blurred smudges.  The recipe is forgiving.  Ingredients need not be precisely measured. 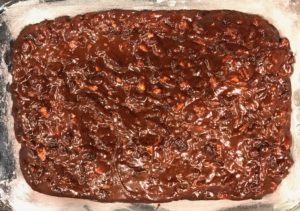 Add pecans, add vanilla, add a splash of rum.  Leave out cloves, add some ginger. Use oleo or butter.  These things don’t matter.  Any simple recipe has at least ONE detail that matters.  It could be a single ingredient.  It could be a technique. Patience is the crucial element of this recipe.  Once the baking soda has been dumped in, turn off the stove, and stir the batter continuously until the foaming bubbles subside completely.  Don’t rush the process.  Always keep stirring  and folding the mixture until the chemical reaction stops.  Only then has the batter cooled enough for the flour to be folded in.  The photo shows the ooey gooey dark batter before being baked.  Wasn’t enough patience for photos before Fussy served the cake tonight.  Fussy believes in sharing food, in sharing love, in sharing secrets.

When you make this family secret, enjoy, knowing that decades of tradition are part of this simple recipe. Remember, simple can be complex if not done right. Fussy loves simple.